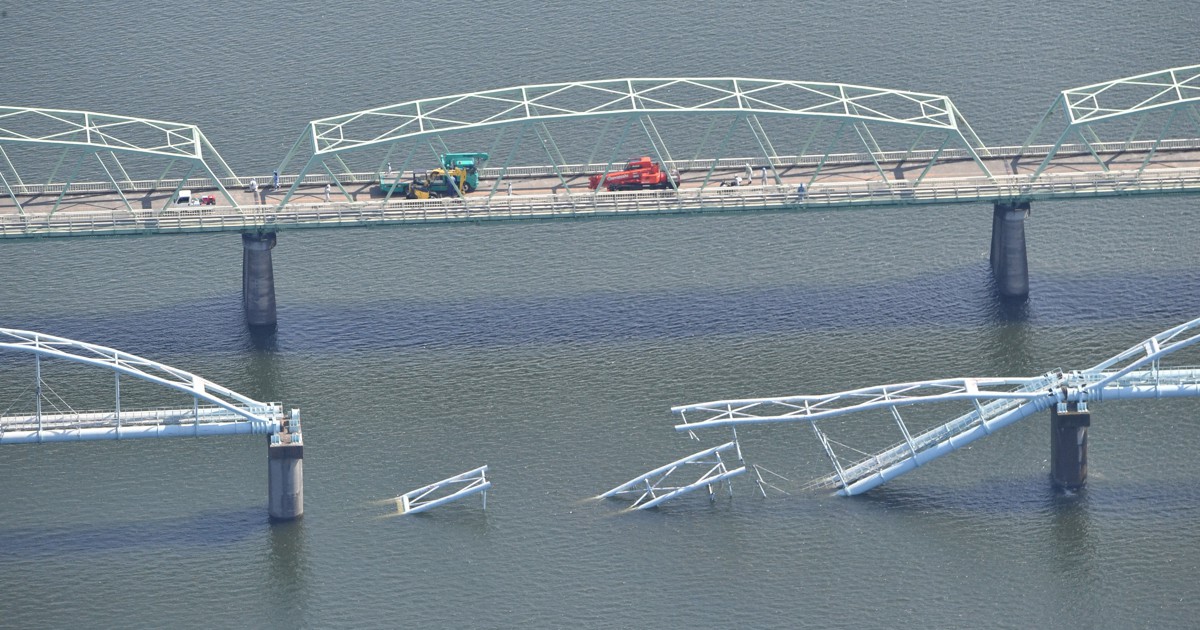 WAKAYAMA – Several parts of a water pipe bridge that collapsed here, cutting off water supplies to some 60,000 households, have been fractured due to corrosion, the mayor of Wakayama said on the 6th. October.

The Wakayama municipal government is considering the possibility that suspension parts corroded and fractured from sea breeze and bird droppings, causing a section of the Musota water pipe bridge to collapse over the river. Kinokawa river.

Corrosion and fractures are believed to have been overlooked during the inspections, and Mayor Masahiro Obana admitted that the checks were inadequate, saying: â€œIf the inspections had been carried out properly, it could have been avoided.

The arch bridge is approximately 550 meters long. About 60 meters of the central part of the bridge, including the water pipes, collapsed around 3:45 p.m. on October 3.

The city examined the bridge in detail on October 6 using drones and other equipment, and confirmed that four hollow steel suspension pipes 4 millimeters thick, each with a diameter of about 14 centimeters, were fractured on the northern section of the collapsed area. The fractures occurred above and below the connections where the braces were attached. A street view image captured by Google Maps last December also showed apparent cracks in the joints in several places.

As of October 6, water had not yet been returned to around 60,000 households representing some 138,000 people in the northern part of the city. There is a growing movement to help residents, who are increasingly exhausted, but the burden on the elderly and others vulnerable to disasters is growing.

Yuka Nakamura, owner of Kofukuyu, a public bath in the southern part of town that was not affected by the water failure, said, â€œRegular users seem to have voluntarily refrained from coming here, and many visitors are new to me. ”

On October 4, the public baths extended their opening hours and allowed all visitors to bathe until midnight. There has even been a movement in the neighborhood to rent parking spaces to customers in remote areas without water. â€œIf there are a lot of people, we might have to ask them to wait, but we’re happy to do everything we can to provide people with a little healing,â€ Nakamura said.

Kodai Takeura, 18, a freshman at Wakayama University, who visited the public baths on October 5 from an area without water, said, â€œIt was great (to be able to take a bath). I live alone and I don’t have many opportunities to bathe in a tub, so I was able to relax here. ”

To alleviate the inconvenience of the lack of water for daily living, the city government has posted information on its website about the locations of “disaster cooperation wells” which can be used free of charge during power cuts. water. Currently, 23 wells are available in areas without supply. Although the city has obtained permission from the owners of the wells for people to use them, they are not required to test the water quality, so authorities are urging people not to use the water from the well for drinking. .

On October 3, the day the water pipe bridge collapsed, several people reportedly came to the well at Keienji Temple in the city to get water even in the middle of the night. Since then, the temple has kept its doors open and the lights on even at night. Hosei Hojo, high priest of the temple, said, â€œYou can bring a polyethylene tank or other type of container and fill it at any time.

The city government has also started distributing drinking water in plastic bottles ranging from 500 milliliters to 2 liters each to 16 locations in the city. The bottles are said to have been donated by companies and others, and distribution will end once they are all gone.

In the meantime, steps have been taken to prepare for the restoration of the affected areas, including an announcement that temporarily closed municipal primary, secondary and secondary schools will partially reopen from October 7.

The city government began emergency work on October 6 to temporarily install water pipes on a prefectural road bridge adjacent to the collapsed water pipe bridge, and will resume water supply on October 8, in the goal of eliminating water outages across the region by October 9.