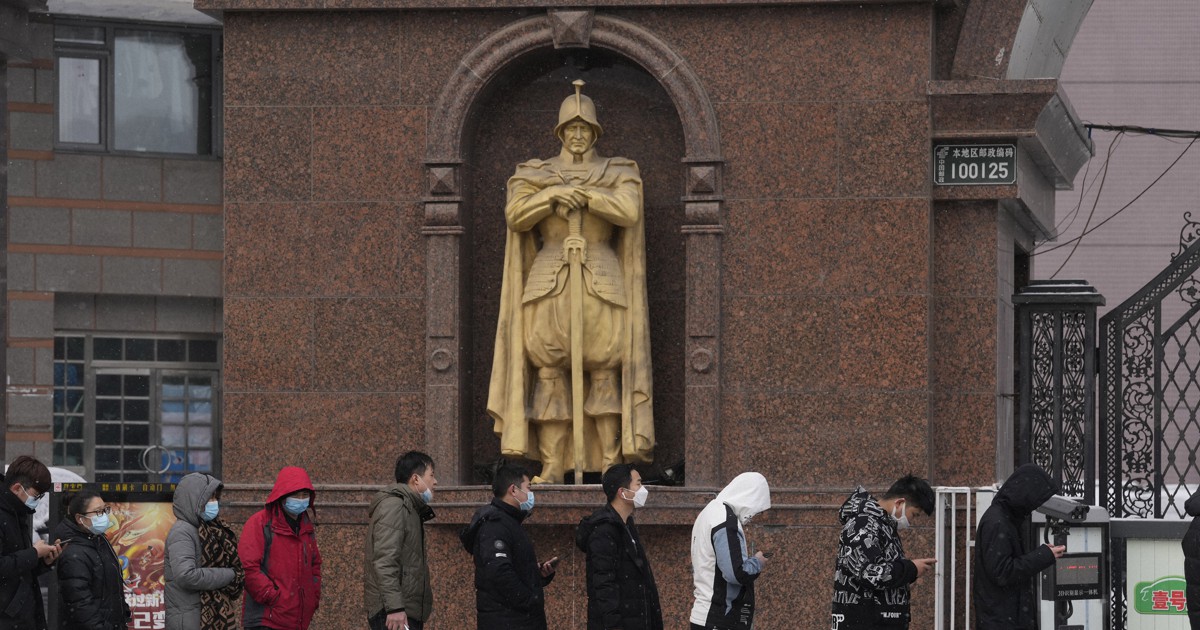 BEIJING, Mainichi — As China prepares for the opening of the Beijing Winter Olympics on Feb. 4, a string of new COVID-19 cases have been confirmed in the country. The Chinese government still adheres to its “zero coronavirus” policy, but the method of completely containing areas where infections are detected has provoked a backlash from some citizens.

Moreover, the behavioral history of infected people released by authorities under quarantine measures reflects the severe disparity between rich and poor, and some say on the internet that it symbolizes the disparities in Chinese society.

January 23 marked two years since the Chinese government locked down the city of Wuhan in Hubei province, where coronavirus infections first spread. Omicron variants are raging around the world and coexistence with coronavirus has become mainstream, with the UK and other countries announcing that they will mostly eliminate virus restrictions. But China is still aiming for “zero coronavirus”. According to Chinese authorities, 56 people were confirmed to be infected with COVID-19 in mainland China on January 22.

The top priority of Xi Jinping’s leadership is the “defense” of Beijing, the host city of the Olympics. However, even in the capital, a number of new COVID-19 cases continued to be reported, including 11 confirmed on January 21 and nine on January 22.

On January 21, Beijing Communist Party Secretary Cai Qi, the capital’s top official, visited his district of Fengtai, where many people have been infected with the coronavirus. He expressed a sense of crisis, saying “the current infection situation is serious” and “the safety of citizens, the safety of the Olympics and the safety of the capital should be ensured as soon as possible.” City authorities are carrying out PCR tests on all of the district’s approximately 2 million residents.

A seven-day holiday will begin on Jan. 31 to celebrate the Chinese New Year on Feb. 1, but city authorities have already asked citizens to stay in the capital and not return to their hometowns. Additionally, from Jan. 22 to the end of March, all people entering Beijing will be required to take a PCR test within 72 hours, indicating that the city will continue to be on high alert during the Olympics and Paralympics.

Meanwhile, in an effort to completely prevent the spread of infections in the city, the Beijing municipal government has released the detailed behavioral history of infected people, but the contents of this record are causing controversy.

On Jan. 15, the city government released the activities of a bank worker in her twenties, who was the first person in Beijing to be confirmed infected with the omicron variant. Over the past two weeks, including the holidays, she has visited luxury brand stores, restaurants, theaters and ski resorts. Citizens who may have had contact with her were asked to report it.

Then, on January 19, they also published the behavioral story of a migrant worker in his 40s. The man was confirmed infected, but had no symptoms. Since the beginning of the year, he has been engaged in the transportation of building materials and scrap metal to construction sites in the capital and has had almost no days off. He has become the topic of conversation on the Internet as “the most difficult Chinese man”.

According to a Chinese magazine, the man was looking for clues to the whereabouts of his eldest son, who disappeared two years ago at the age of 19. He hadn’t been able to get the cooperation of the local police to search for his son, so he moved from town to town, earning money every day while continuing his search. This report sparked a flood of criticism against the authorities. On January 21, local police announced: “We have confirmed that a drowned body found two weeks after the disappearance was his son through DNA analysis. The parents did not accept the fact.

Along with sympathy for the man, there were a series of posts online highlighting the disparity, saying things like, “They live in the same time and place, but in completely different worlds. This is the reality of China today,” and, “If it hadn’t been for the coronavirus pandemic and no disclosure of behavioral histories, we wouldn’t have been aware of this reality. ”

It seems that the zero coronavirus policy has shed light on the contradictions facing Chinese society.