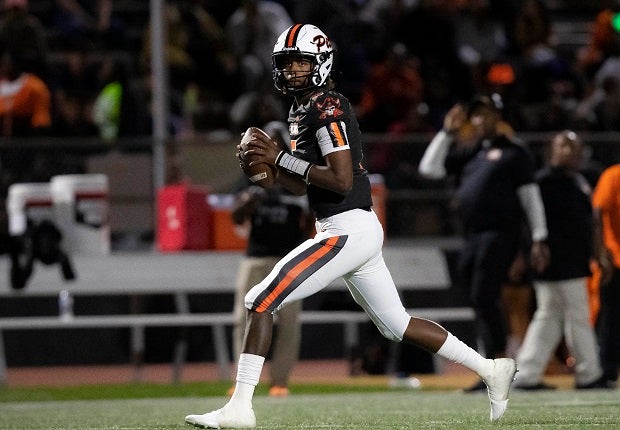 The NorCal showdown this week is No. 3 De La Salle visiting No. 6 St. Mary’s of Stockton. The top two leagues are the Sierra Foothill League of the SJS and the West Catholic Athletic League of the Central Coast.

1. (Last week 1) Serra (San Mateo), 5-0
Last week: Defeated Archbishop Mitty, 35-7
This week: against Bellarmine
Serra is 2-0 in the West Catholic Athletic League after a rout of Bellarmine in the only home game of the season. Maealiuaki Smith passed for 209 yards and two touchdowns and Jaden Green went 85 yards for a score. The other victories are 17-12 over Folsom and 24-21 over De La Salle.

2. (2) Folsom, 5-1
Last week: Defeated Oak Ridge, 42-13
This week: at Whitney
The Bulldogs blanked their rivals in the second half after going 21-13 in a Sierra Foothill League opener, and Austin Mack hit Rico Flores Jr. for two touchdown bombs to break it. This is Folsom’s 17th straight victory over Oak Ridge. Folsom beat Pittsburgh 23-15 and De La Salle 24-20 and lost 17-12 to Serra.

3. (3) De La Salle (Concorde), 3-2
Last week: Goodbye
This week: In Sainte Marie
The Spartans had a bye and are gearing up for another team keen to face them at St. Mary’s, a program that has challenged DLS in non-league games before, a few thrillers, but has never defeated the Spartans. The DLS losses are 24-21 against Serra and 24-20 against Folsom.

4. (4) Pittsburgh, 4-1
Last week: Defeated McClymonds, 39-21
This week: against Liberty
The Pirates impressed by beating Mack as Khai Taylor grabbed two touchdowns, and Cameron Clanton had a touchdown run to seal it. Jaden Rashada had three touchdown passes for the Bay Valley Athletic League favorites. The loss was 23-15 to Folsom.

6. (7) St. Mary’s (Stockton), 6-0
Last week: Defeated Lodi, 35-14
This week: against De La Salle
A 14-14 game got the Rams all behind on offensive balance and defense for a booming program that’s quite a contender in the Sac-Joaquin Division’s Division I championship chase. The confrontation with De La Salle will be revealing.

9. (5) Buchanan (Clovis), 5-1
Last week: Lost to Clovis West, 29-22
This week: against Central
The Bears impressed with a 99-yard drive, capped off by Michael Runnels running it from 24 yards, but Clovis West won it with a deep touchdown. The Tri-River Athletic Conference run will be good.

10. (12) Saltworks, 6-0
Last week: Defeated Santa Cruz, 55-7
This week: Goodbye
The Cowboys have rolled but still have challenges ahead against Aptos and Palma. This could be the No. 1 seed in Division I for the Central Coast section if the train keeps rolling.

12. (14) Liberty (Bakersfield), 4-2
Last week: Defeated Garces Memorial, 13-0
This week: in Stockdale
The Patriots bounced back from their 27-0 loss to powerhouse San Diego Carlsbad with a satisfying effort in the Yosemite River League.

13. (8) Granite Bay, 5-1
Last week: Lost to Del Oro, 21-10
This week: against Oak Ridge
The Grizzlies were shut out in one half for the first time this season, shut out in the second half as the offense came to a halt. The next SFL showdown is against Oak Ridge, where the loser will suddenly be 0-2 in the league.

15. (16) Wilcox (Santa Clara), 5-0
Last week: Defeated Mountain View, 44-14
This week: in Milpita
The Chargers rolled behind quarterback Armand Johnson, who passed for 256 yards and three touchdowns, and Elijah Diallo Walker rushed for 144 yards and a score.

16. (15) McClymonds (Oakland), 3-1
Last week: Lost to Pittsburgh, 39-21
This week: against the valley of San Ramon
The Warriors were led by running back Jaivian Thomas with another big non-league NorCal game against 5-0 San Ramon Valley.

17. (17) Vanden (Fairfield), 6-0
Last week: Defeated Armijo-Fairfield, 42-6
This week: against Vacaville
The defending CIF State Division 3-AA champions won their 13th straight game as Tre Dimes fired three touchdown passes. Vanden now faces the team that last tied them down with a loss: Vacaville. It will be for the Monticello Empire League championship.

18. (19) Catholic Mariner (Kentfield), 6-0
Last week: Goodbye
This week: against Tamalpais
The Wildcats are class in the Marin County Athletic League.