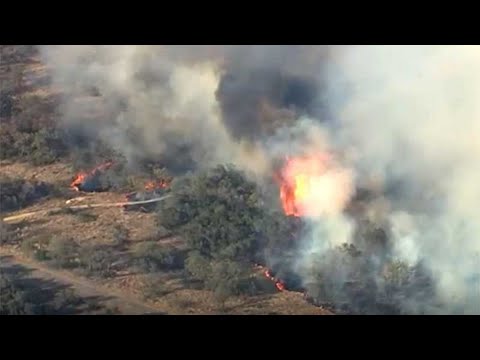 Medina County Das Goat Fire is now 70% contained and has burned over 1,000 acres

SAN ANTONIO (KTSA News) — The Das Goat fire near Medina Lake is still ablaze, but is believed to be more than half under control.

The county was under a burning ban when it began Friday night after a vehicle caught fire while he was driving. The fire turned to brush when the driver pulled the car to the side of the road.

By Sunday, the blaze had torched more than 1,000 acres and destroyed at least three homes. No injuries were reported.

Medina County officials operate a shelter in Helotes at Our Lady of Guadalupe Church located at 13715 Riggs Road. The shelter can be called at 210-602-7233.

Authorities plan to reopen CR 2615 around 9 a.m. Tuesday, including the entrance to the High Mountain subdivision. The neighborhood will be open to residents only and will need to present a valid ID to enter.

The opening of CR 271 is scheduled for Tuesday noon.

Governor Greg Abbott issued a disaster declaration for Medina County, amending a statewide statement made on March 18 for Blanco, Brooks, Brown, Coleman, Comanche, Eastland, Erath,
Grayson, Hood, Mason, Potter, Randall, Runnels, Starr and Williamson counties. The proclamation was made in response to a number of fires that started as fire conditions intensified in the Lone Star State.

Texas A&M Forest Service noted that fire conditions will continue to worsen during the week, noting that critical fire conditions are expected to develop in the state west of the I-35 corridor.

“As conditions across much of the state worsen, igniting wildfires are burning more intensely and are often beyond control,” said Texas A&M Forest Service Fire Chief Wes Moorehead. “Unfortunately, little to no rainfall is forecast for the immediate future and we expect the current level of wildfire activity to continue for some time.”

Smoke from multiple wildfires can be seen via satellite early tonight across central, south and east Texas. The smoke from #DasGoatFire in Medina County as well as fires in Kerr, Gillespie and Atascosa counties generated large plumes of smoke. pic.twitter.com/BSmmqOf0bP