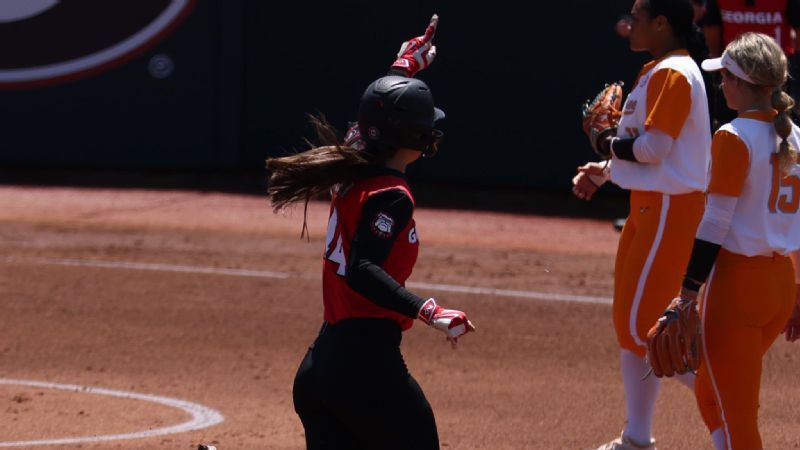 ATHENS, Georgia – Junior Sydney Kuma and senior Lacey Fincher each hit two home runs and combined for seven RBIs in No. 15 Georgia’s 12-4 victory over No. 12 Tennessee on Sunday at Jack Turner Stadium.

A crowd of 1,997 was in attendance for the victory. Official attendance sinks as the fifth largest crowd at Jack Turner Stadium.

With the win, Georgia wins the series against Tennessee, improving to 33-8 on the season and 7-5 in SEC play. It’s Georgia’s third win in the series after four weeks of conference play.

Rookie Lyndi Rae Davis went 3 for 3 with an RBI. Redshirt-junior Jaiden Fields recorded two hits with three RBIs, including delivering the game-winning single in the bottom of the fifth to secure the run-rule victory.

Tennessee’s Kiki Milloy quickly put the Lady Vols ahead with a first home run to the left to start the game, 1-0.

The Bulldogs fought back in a big way late in the set. Savana Sikes began the frame by drawing a four-pitch step. Kuma stepped in and hit a two-run home left, giving Georgia a 2-1 lead. Fincher followed with a solo shot on the left video card to widen the lead to 3-1.

A trio of two-out runs came in to score for Tennessee in the top of the inning to put the Lady Vols ahead, 4-3.

After two quick takedowns late in the second, Georgia didn’t go easy. Kuma hit his second home run of the day to tie the game at 4-all. A walk to Fincher and a hit from Jayda Kearney put two in. Fields drove in both innings with a left double, putting Georgia ahead 6-4. Fields immediately scored on a batted base from Davis, extending the lead to 7-4 after two innings.

Pinch runner CJ Landrum scored late in the third on a wild pitch to double the lead to 8-4. Later in the inning, Fincher hit his second home run of the game, a three-run right shot, extending the lead to 11-4 after three innings.

Kerpics held the Lady Vols scoreless in the third, fourth and fifth innings to put the Bulldogs in position to win it in five.

Kuma’s third hit of the game led into the top of the fifth, then Fincher walked his second. The pick of a defenseman reduced Fincher to second, but Kumatook third on the play. Fields then delivered a single to right center to tackle Kuma and secure the 12-4 win in five innings and the series over the Lady Vols.

The Bulldogs return to Missouri next week for a three-game series. The series kicks off Thursday night at 6 p.m. ET at Mizzou Softball Stadium in Columbia.

“Just super proud of how our team competed. I thought we had a good frame of mind. I thought we were in a really good place and playing Georgia softball. I don’t know if you get in a game against an all-American caliber pitcher and I think it’s going to be okay but really proud of how calm we were in the box I thought we saw the ball well and got our swing right . I was thinking [Sydney] Kuma gave us a good start and Lacey [Fincher] Back right. For both of them, hitting two home runs in a game was pretty exciting. i was thinking of madison [Kerpics] was really gritty. I didn’t think she had her best today but I thought she kept us in the game and kept fighting and got us all the way to the end. I’m just very proud of the team.”

In the crowd today….

“It was awesome. We could totally feel their presence. When we can get Bulldog Nation here and they’re in the game, it just creates home court advantage and a great atmosphere. It was a great day for softball university on national television. Great crowd, two good teams taking part, and very grateful for such a great day.”