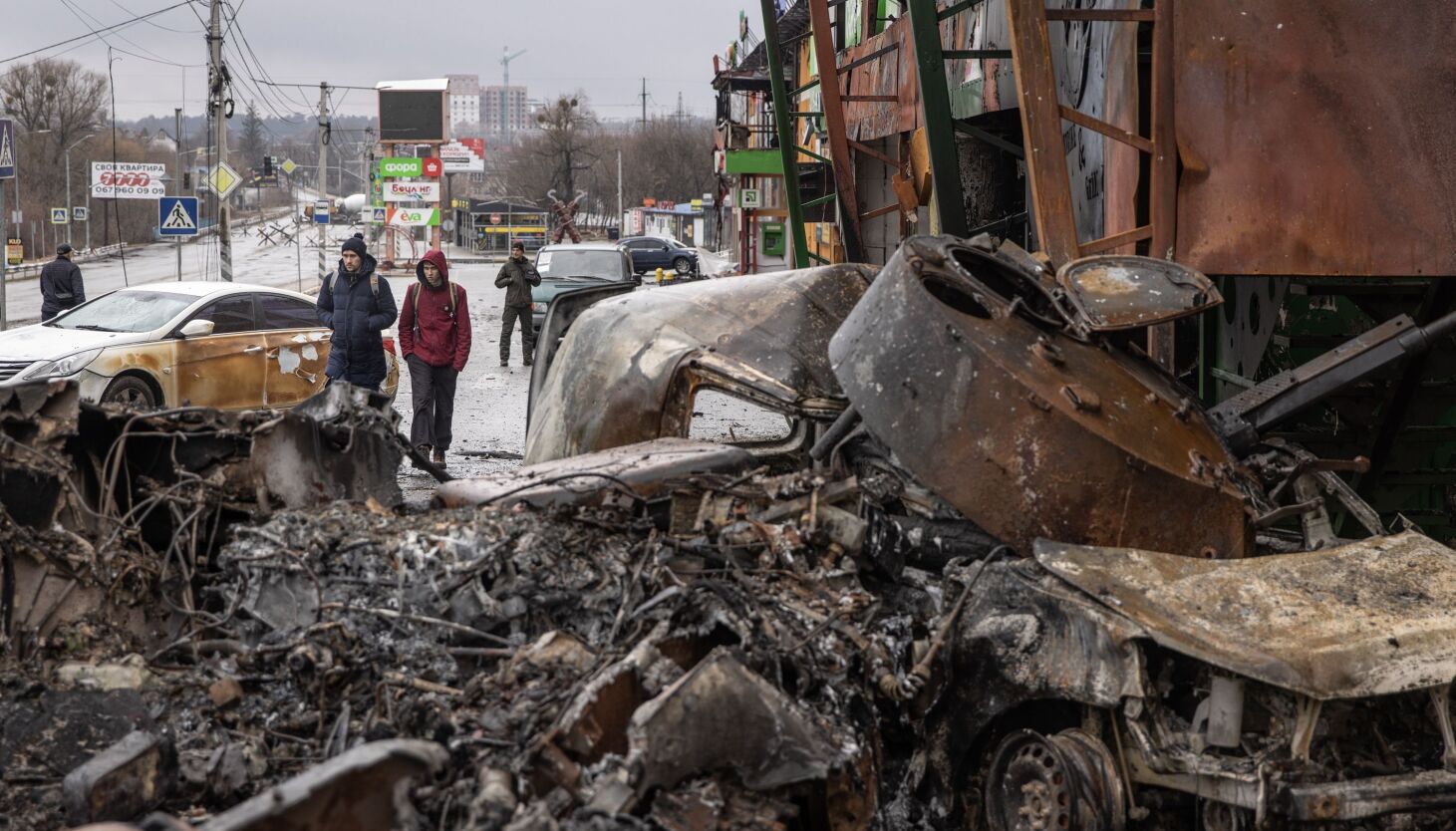 As I write, a 40-mile-long convoy of Russian “blue helmets” – that is, tanks, armored personnel carriers and mobile artillery – is approaching Kiev with the clear intention to force the Ukrainian people to surrender. The dead-eyed little Kremlin killer is too scared to back down.

Even so, it will not happen. Vladimir Putin’s forces can besiege the Ukrainian capital and demolish its monuments – albeit at a horrifying cost to the conscripted Russian army – but overcoming the patriotic resolve of its people seems beyond its capabilities. So far, Putin’s invasion has accomplished two things: making Ukraine an international symbol of democracy and making Russia’s gangster state an international pariah.

And a bankrupt pariah to boot.

Already, the reputation of Russia’s vaunted military has been tarnished by a display of logistical incompetence that has left its forces short of fuel, stranded and at the mercy of Ukrainian irregulars. The Washington Post reports that “videos from around the country depicted scenes of burnt Russian tanks, dead Russian soldiers, and captured Russians, some barely out of their teens, making plaintive pleas to their parents.”

They’re mostly conscripts, you know. Obviously, many had no idea they were being ordered to invade. Putin has little regard for Russian lives either.

Moreover, even if Putin’s forces were to capture or kill Ukrainian President Volodymyr Zelenskyy, they will first have succeeded in transforming him into a heroic avatar: a living symbol of freedom who used his talents as a television entertainer to rally his people against the brutality of the Kremlin.

Frankly, it’s hard to imagine how Putin’s reign survives the consequences of his huge gaffe. “When dictators rule for decades,” former US Ambassador to Russia Michael McFaul wrote on Twitter, “they 1. stop listening to advisers, 2. disconnect from reality, 3. spend a lot of time alone and 4. go too far This is exactly what happened to Putin.

McFaul also tweeted that he is “confident to predict that Putin’s evil invasion of Ukraine marks the beginning of the end of Putin’s dictatorship and Putinism in Russia. No moral person can support this heinous war. There is has millions of legal persons in Russia.

Frankly, it’s good to remember that. All over Europe, athletes refuse to play against Russian teams. In Moscow, however, the costs of dissent are high.

Putin’s political rivals keep falling off tall buildings and finding deadly toxins in their underwear. Chances are he’s bluffing about Russia’s nuclear arsenal, like a bar brawler demanding his friends hold him back. Nevertheless, if the tyrant’s rage and paranoia caused him to order a nuclear strike, I suspect the patriotic Russian officers would refuse.

And that could well be the end of it.

Closer to home, Trump’s Republicans find it hard to remember which side they are on, let alone remember that their hero was impeached for trying to blackmail President Zelenskyy into conjuring up a false investigation of Joe Biden. Trump also froze military aid to Ukraine and even echoed Kremlin propaganda that Ukraine, not Russia, interfered in the 2016 US election.

Eric Boehlert points out that on Fox News, whose commentators are regularly featured on Russian state television, a smirk “Laura Ingraham derided… Zelenskyy’s impassioned plea for peace as a ‘pathetic display of a “defeated man”. Tucker Carlson announced, “No one on this show is… rooting for Ukrainians, by the way,” insisting that Putin “just wants to keep his western borders secure.” Famous author and Ohio GOP Senate candidate JD Vance said, “I don’t care what happens to Ukraine one way or another.

After the political tides turned, Vance did too.

That’s who they are, America. Memory.

Meanwhile, on the weak wing of the Republican Party, the inimitable Marjorie Taylor Greene spoke at a white supremacist rally in Orlando whose organizers cheered on Russia.

Greene then pretended to ignore the group’s opinions.

It’s only been a month since Vance, who has previously called Trump an “idiot” and likened his fanbase to opioid addicts, said he was “honored” to accept Greene’s endorsement.

Today’s white nationalists are the spiritual (and sometimes literal) descendants of the “America First” movement of the 1930s, which held pro-Nazi rallies from Madison Square Garden to Pearl Harbor.

So yes, America, we’ve seen this movie before.

Then there is the big man himself. Even as the tanks rolled by, Donald J. Trump called Vladimir Putin a “scholar” and a “genius.” Speaking at a fundraiser in Florida, he described the Russian invasion as a smart real estate deal.

“He took over a country for $2 in sanctions,” Trump said. “To take over a country – really a big, vast place, a big piece of land with a lot of people – and just walk in it.”

The man is a moral fool.

Now he says that if he had been president, Russia wouldn’t have dared – this guy who practically sent an engraved invitation to Putin.