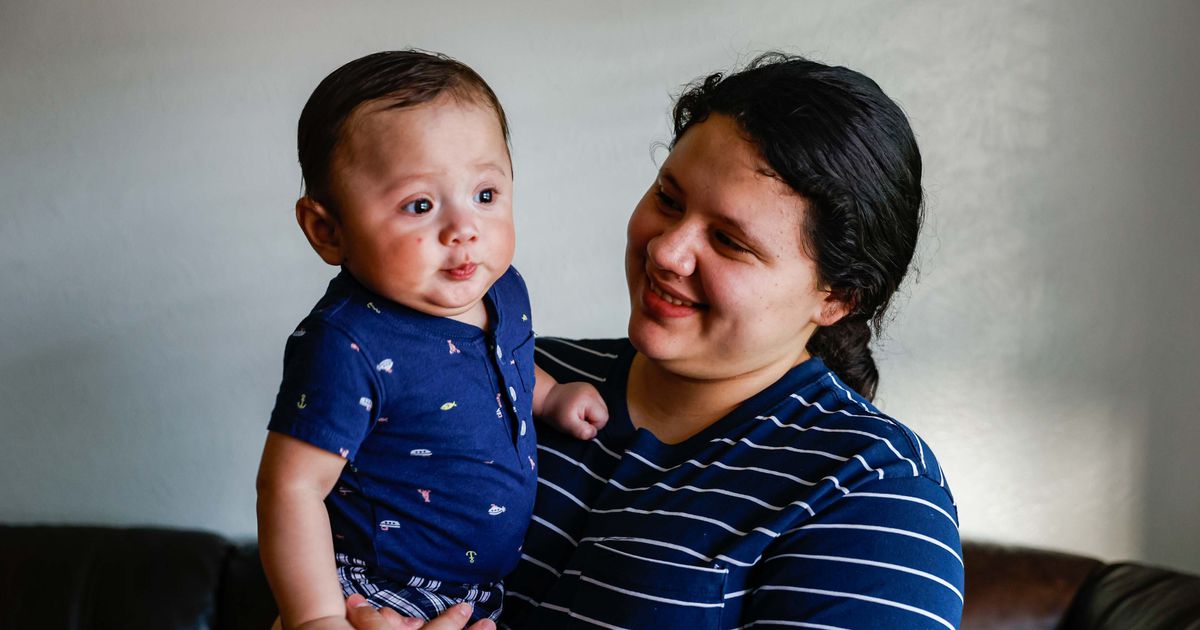 During the winter, Carolina Paz struggled to cover her family’s food costs. Even though money was tight, she decided not to ask for any federal help, thinking it might have an effect on her migration process.

Originally from Honduras, Paz arrived in the United States just over a year ago seeking asylum. She fled her country due to violence and poverty, embarking on a journey to follow the “American Dream”, even though she was four months pregnant.

After being held for a month, Paz was released and arrived in Denton, where she now lives with the father of her children, who works in construction and sees his income dwindling during the winter months as he has fewer work.

“At first I was told there was a lot of help I could ask for and since my babies were born here it would be given to me. I applied for WIC, insurance for my children and food stamps (SNAP),” said Paz, 19. “But then I was told that the patches might affect me in my case.

Fear surrounding the application of benefits grew during Donald Trump’s presidency when he updated the “public charge” rule in the United States immigration system. Today, the application of the rule does not have as many restrictions, but the fear persists and continues to prevent immigrants from applying for any benefit.

“Yeah, a lot of people have stopped asking for help because of this rule,” said Carolina Rivera, an attorney at Catholic Charities in Dallas. “Although it seems that the fear is going away.”

A study carried out by the organization No Kid Hungry showed that currently 41% of people still think that the demand for assistance programs can cause migration problems.

Since 1999, the United States government has included certain limitations for those seeking permanent residency in the country. The “public charge” rule was created, denying immigration benefits to those who would depend on the U.S. government after obtaining immigrant status, especially those who need extra security income or institutionalized care from long duration.

In 2019, President Donald Trump changed this rule and tightened its parameters for who qualifies as a public charge by including other aids such as Medicaid and others that are popular among the immigrant community.

In March 2021, Joe Biden’s administration ended the application of the previous administration’s public charge rule, but this had a chilling effect on the immigrant community that still continues.

In February 2022, the Department of Homeland Security proposed a new public charge rule with clarifications on what could and could not affect immigration cases.

When it came time to renew SNAP, Carolina Paz decided against it because she wasn’t sure it would affect her asylum hearing in 2024.

“People told me that if I got stamps I couldn’t pay my taxes, or that I or my kids would be billed later when they grew up,” Paz said. “So I decided it was best not to get the patches even though we needed them because my kids are starting to eat solid foods.”

According to the Urban Institute, in 2020, one in seven immigrant families said that one of their family members had refused a government benefit, such as Medicaid, CHIP, SNAP or housing assistance to avoid a negative impact on their immigration process. immigration.

Much of the problem is caused by misinformation, which is spreading fear among the immigrant community about the scope of the new public charge rule.

“While government agencies, hospitals and community organizations have all taken steps to minimize gaps in service delivery and alleviate fear of immigrants, more can and should be done,” said Donald Kerwin, executive director of the Center for Migration Studies (CMS) during a presentation of a study on the effects of the public charge rule.

During the covid-19 pandemic, this rule has had an impact on people directly or indirectly affected by the coronavirus.

When the covid-19 pandemic hit and thousands of businesses across the country closed, María Klein fell ill with covid-19 and suddenly found herself jobless and unable to seek any help.

“I didn’t even apply for unemployment,” Klein, 34, said. “I preferred to find a way to reduce my expenses so that I would not have to ask for help that could harm me.”

In 2019, Klein, born in Mexico, began her process to obtain permanent residence and her lawyers were very clear: they prohibited her from seeking any help that could affect her case.

With two teenagers who, being home all day, increased their food intake, Klein had to rely on her husband, who did not lose his job, and their household finances had to be reorganized during the period when she could not work.

Klein did not ask for help to cover her children’s health insurance, food stamps or school meals, and was scared when the stimulus checks arrived in her mailbox.

“I called my lawyer right away to check if it could affect us because we didn’t ask for them, they came here on their own,” Klein said. “And they told us that was a general advantage that couldn’t affect us.”

Klein has returned to a normal work schedule and is also studying forensics at North Central Texas College.

In its study of the public charge rule, No Kid Hungry pointed out that nearly half of those surveyed, 46%, said they had not sought help during the COVID-19 pandemic due to concerns about their lives. immigration status.

For Andrea Chavarría, an attorney at the Chavarría law firm in Dallas, when it comes to government assistance and the immigration process, it’s not all clear.

“The public charge rule has been around for decades, but it was President Donald Trump who enforced it more strictly, and it complicated immigration cases at the time,” Chavarría said. “But now the rule is enforced like it was before Trump.”

During the previous administration, Chavarría explained, those who requested a change of status in the country were asked to provide detailed information about their bank accounts, assets, whether they had credit or how much money. they had.

“And if in addition, the request for help was added, the matter would be complicated,” Chavarría said.

“You shouldn’t apply for a benefit that would get you cash,” Chavarría said. “Like Supplemental Security Income (SSI) or being institutionalized for a long time, anything that would indicate that you or your family are earning very little and may be a burden on the country.”

Other benefits such as Medicaid, CHIP, SNAP, or social housing will not affect your immigration process.

Chavarría’s recommendation is that if your immigration process is ongoing or will be in the future, consult an immigration lawyer before applying for a benefit to rule out any negative impact on your case.

Raising rates is a delicate but necessary balancing act