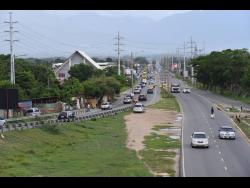 There can hardly be any complaints about Prime Minister Andrew Holness’s acknowledgment of the embarrassment at the neglect and destitution along Washington Boulevard, the main thoroughfare from the west to the uptown areas of the Jamaican capital.

Indeed, it is welcome that Mr. Holness intends to do something about this and that he appreciates the positive effects of public parks and green spaces on people’s sense of well-being and on communities in which they live. That’s why we welcome the government‘s plan to redevelop Maverley Park, at the intersection of Washington Boulevard and Molynes Road, for which the Prime Minister opened last week.

We also hope that the Maverley Park project marks an acceleration of initiatives to develop and maintain green spaces across the island, as well as the reversal of political decisions that will hinder or weaken these efforts. Specifically, the administration should scrap its plan to build the new Parliament building at National Heroes Park, the old racetrack, and develop the land for what the legislature, in law, wanted: a recreation area.

Additionally, the Prime Minister’s observation on Washington Boulevard provides a good segue into a fuller conversation about how the Kingston and St Andrew metropolitan area and other urban areas are run and how to save our cities and towns from worsening degradation. This discussion should be started urgently, because it is quite obvious that municipal governments, which have the primary responsibility for managing cities and towns, do a terrible job of it.

In last week’s speech at Maverley Park, Mr Holness lamented the dilapidated Washington Boulevard heading into the city from the west.

He said: “I don’t think we can say it gives us pride when you look left and right as you enter the city from the Mandela Highway. Granted, when you exit the overpass, come onto Washington Boulevard, and look left toward New Haven, that’s not what you want to be greeted upon entering the city. As you drive, you see all kinds of operations that really should be back-office operations, like garages and all kinds of other operations, that interfere with the free flow of traffic.

In the 1990s, Washington Boulevard was redeveloped into a two-lane road. Its roadside auto repair and body shops were abolished; concrete block walls have replaced rusty galvanized zinc fences; and on most sections of the roadway, drains were designed to prevent direct access of vehicles from the boulevard to the parallel vehicular lanes adjacent to the buildings. The medians and sidewalks have been embellished with shrubs.

But typical of Jamaica, nothing has been or maintained. As the prime minister noted, authorities failed to enforce the laws when garages reappeared and other shops and businesses opened. This happens, Mr Holness explained – rightly – because politicians do not act because they are afraid of losing votes.

However, the shabbyness of Washington Boulevard doesn’t have to be as bad as it is. And his tousle isn’t entirely the fault of the people who own or control the horrors that bothered Mr Holness as a youngster riding buses along the road and now as Prime Minister (PM). Medians and shoulders are usually overgrown and neglected because the Kingston and St Andrew Municipal Corporation, the municipal government, is horrible at keeping them tidy. The central government’s National Solid Waste Management Authority does not prioritize cleaning rubbish from the roadway. Likewise, fixing Washington Boulevard’s potholes or keeping its traffic marks fresh doesn’t get priority at the National Works Agency.

However, following Mr Holness’s observation, the government has an opportunity to show that it can do small things that make a difference in people’s lives – and do them right. But it will also require a shift in another apparent assumption of those who run our affairs: that even the most basic community projects must cost huge sums far beyond their real apparent value. These processes require strong oversight and accountability to avoid excesses.

Moreover, at Washington Boulevard, there is a much larger problem than the aesthetics of entering the city. The bigger issue is to keep communities along the road, and urban Jamaica in general, from going any further to sow. Fortunately, New Haven, Maverley, Waterhouse and others along Washington Boulevard are far from being the worst victims of urban blight in Jamaica.

Most of the time, these communities have relatively decent housing stock and road and water infrastructure. Given the Prime Minister’s emphasis on Washington Boulevard, these communities could serve as a model for a major program of urban renewal along the lines suggested by this journal: leveraging the resources of public housing and other institutions to access private sector capital and expand it. as well as money from international partners and community equity for an assault on urban rot.

As part of this sustained urban renewal venture, government agencies such as the National Housing Trust could suspend support for new developments for five to 10 years, and the administration would shelve initiatives such as its plan to build a new town on the “most fertile… A1 of the soil” at Bernard Lodge in the Sainte-Catherine plain.