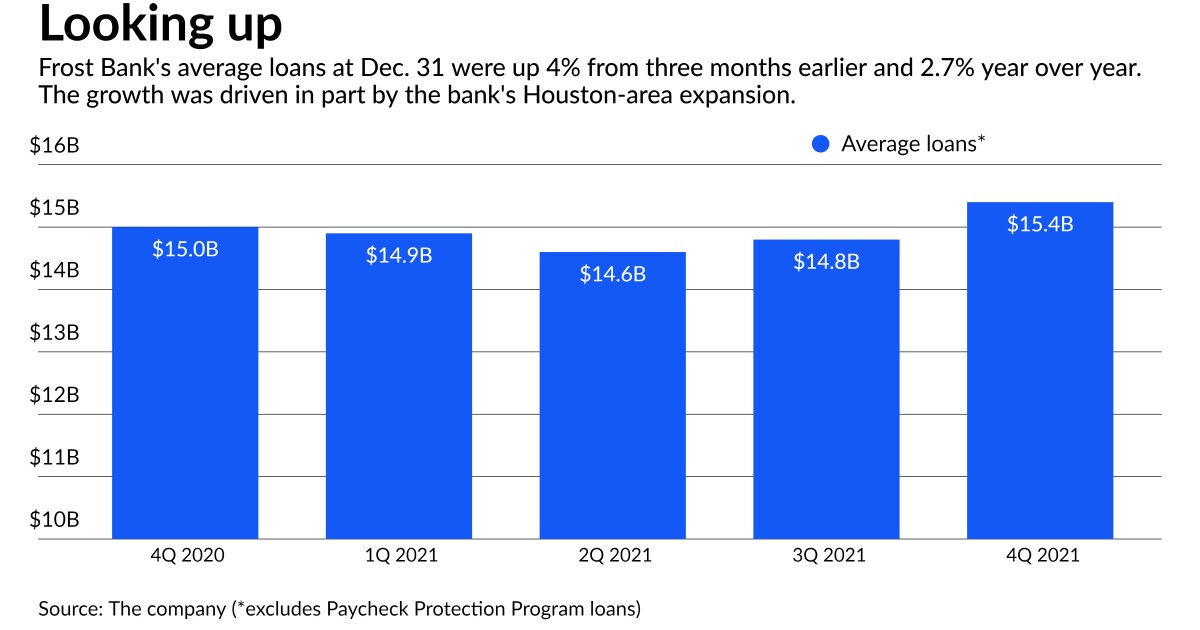 Cullen/Frost Bankers in San Antonio is sticking to its organic expansion plan even as other midsize banks look to mergers and acquisitions to drive growth.

Frost Bank’s parent company, with $50.9 billion in assets, booked $2.4 billion in new commercial loans in the fourth quarter, which company executives say validates its decisions to open more two dozen branches in the Houston market over the past three years and to follow a similar path in Dallas.

“Mergers and acquisitions are not something that’s on our radar,” Chairman and CEO Phil Green said in an interview after the company announced its fourth-quarter results Thursday. “We set our sights on the biological strategy.”

Cullen/Frost opened its 25th branch in Houston in 2021 after announcing a market expansion three years earlier. Bankers hired in these locations have already exceeded their lending goals, Green said.

Eight or nine more locations in Houston are planned for this year and 2023, the bank announced Thursday. Meanwhile, about 25 offices are planned in Dallas, with the first opening this month. The bank forecast “single-digit” loan growth this year, Green said.

Still, competition for loans is fierce, Green said on the bank’s earnings call.

Of the deals Cullen/Frost lost in the fourth quarter, 64% were the result of potential customers finding easier terms or more attractive loan structures elsewhere.

This represents an increase from the 56% of deals lost a year earlier due to competition elsewhere. Still, Green said he has no intention of easing underwriting when “there is no green pasture on the other side of the fence from great credit quality.”

“That may sound good, but it’s a wasteland out there,” Green told analysts.

“It’s still a spike,” Green said of the price of lumber. “At least one project I know of has been postponed due to cost increases they have seen.”

The bank reported net profit of $101 million in the fourth quarter, up 14% year-on-year. Revenue increased nearly 5% from a year earlier to $349 million. Non-interest expense increased 6.7% year-over-year due to higher occupancy costs and higher salaries and benefits.