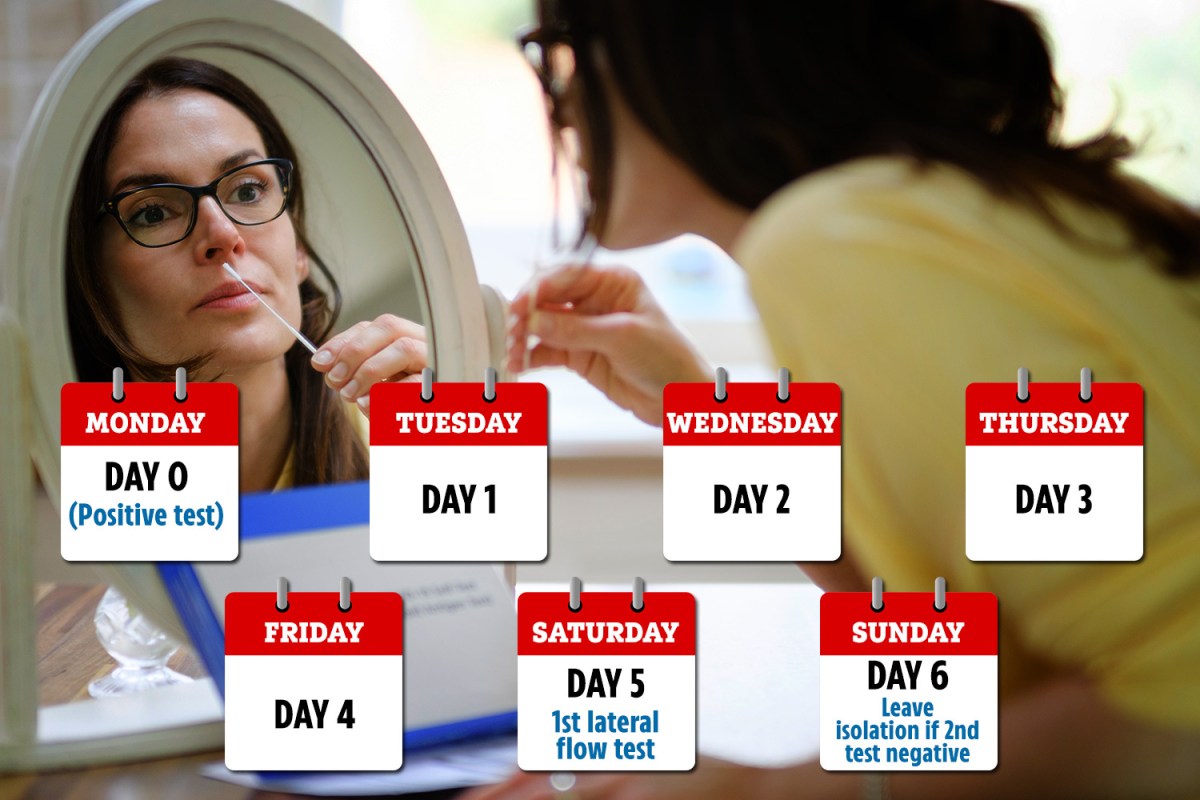 NEW changes to the Covid isolation rules are coming from Monday – but you’ll be forgiven if they’ve left you feeling a bit confused.

From January 17, people in England who test positive will be able to leave their homes after a full five days, Sajid Javid announced yesterday.

It comes after the government was urged by businesses and experts to reduce isolation from seven to five days – to get Britons back to work amid a staffing crisis.

But the confusing detail of the new rules means anyone who self-isolates will technically have to do so for six days, not five.

This is because the first full day of isolation is NOT the day you test positive or notice symptoms – although you should still self-isolate after either of these events.

That day is now known as ‘day zero’, with the following day counting as the first day, the UK Health Security Agency has confirmed.

Covid patients must then test negative on lateral flow tests on days five and six in order to be released from isolation.

An example timeline is as follows:

Monday = Day 0 (when you develop symptoms or test positive)

The rule change was confirmed by the Health Secretary yesterday – after experts called for isolation to be reduced as the NHS struggles with mass staff absences.

Health chiefs had resisted doing so earlier, having already reduced isolation from ten to seven days just before Christmas.

Mr Javid said: “The UKHSA data shows that around two-thirds of positive cases are no longer infectious by the end of day five and we want to use the testing capacity we have developed to help these people leaving isolation safely.

“After considering all the evidence, we have taken the decision to reduce the minimum period of self-isolation to five full days in England.

“From Monday people can test twice before leaving – leaving isolation at the start of the sixth day.

“These two tests are essential to these balanced and proportionate plans, and I urge everyone to take advantage of the capacity we have accumulated in the tests so that we can restore freedoms in this country while protecting everyone.”

RULES FOR PEOPLE WITH SYMPTOMS

Isolation begins on the day of your first symptoms.

You must remain in isolation for five full days and can leave after negative sidestreams on the fifth and sixth days.

So if you noticed symptoms on Monday morning, which counts as day zero – regardless of when you later tested positive – you can take your first lateral flow test on Saturday (day five). This means you could be released from solitary on Sunday morning after a second negative lateral flow test.

But if you continue to test positive, you should still stay in isolation until you test negative.

RULES FOR PEOPLE WITHOUT SYMPTOMS

Isolation begins on the day of your first positive lateral flow test.

You must remain in isolation for five full days and can leave after negative sidestreams on the fifth and sixth days.

For example, if you test positive on Monday morning at 11 a.m., which counts as day zero, you should wait until Saturday (day five) to take your first test and see if you are negative. This means you could be released from solitary on Sunday morning after a second negative lateral flow test.

But if you continue to test positive, you should still stay in isolation until you test negative.

🔵 Follow our Covid live blog for all the latest updates

A series of overwhelmingly positive studies show Omicron to be milder than other strains in vaccinees, with the first official UK report revealing the risk of hospitalization to be 50-70% lower than Delta.

Covid booster shots protect against Omicron and offer the best chance of getting through the pandemic, health officials have said repeatedly.

The Sun’s Jabs Army campaign is helping to get vital extra vaccines into the arms of the British to avoid the need for further restrictions.

Omicron is now the dominant strain in the UK and most people who test positive with the variant suffer from cold symptoms.

New rules now state that anyone who tests positive on a lateral flow must record their results and self-isolate, and if they don’t have symptoms they don’t need to have a PCR.

If they have symptoms, they should still follow up with PCR, regardless of the LTF result.

The rules, until Monday, require anyone who tests positive to self-isolate for seven days until they get a negative lateral flow.