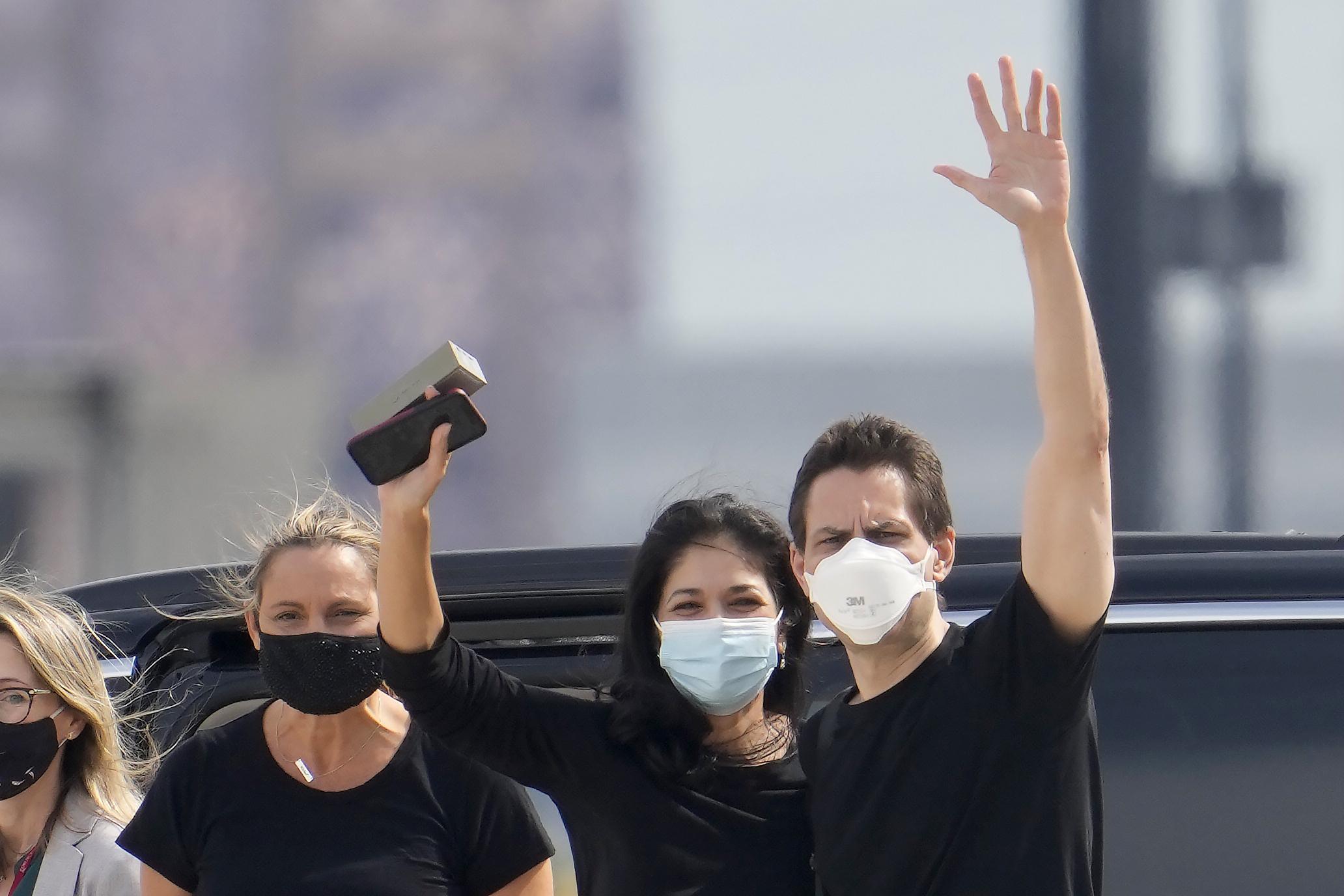 TORONTO (AP) – China, the United States and Canada have concluded a high-stakes prisoner swap with happy homecoming for two Canadians detained by China and for an executive of Chinese global communications giant Huawei Technologies accused of fraud, potentially ending a 3-year feud that involved the three countries.

Canadian Prime Minister Justin Trudeau hugged diplomat Michael Kovrig and entrepreneur Michael Spavor on the tarmac after they touched down in Calgary, Alta. Early Saturday. The men were arrested in China in December 2018, shortly after Canada arrested Meng Wanzhou, chief financial officer of Huawei Technologies and daughter of the company founder, in connection with a US extradition request.

Many countries have called China’s action a “hostage policy,” while China has described the charges against Huawei and Meng as a politically motivated attempt to curb China’s economic and technological development.

“It’s fantastic to be back in Canada and I’m extremely grateful to everyone who worked hard to bring us both home,” said the visibly slimmer Kovrig after a government plane Canadian landed in Toronto and was greeted by his wife and sister. .

Meng’s return to China later Saturday was broadcast live on state television, highlighting how Beijing has linked his case to Chinese nationalism and its rise as a global economic and political powerhouse.

Wearing a red dress to match the color of the Chinese flag, Meng thanked the ruling Communist Party and its leader Xi Jinping for supporting her for more than 1,000 days under house arrest in Vancouver, where she owns two mansions of several million dollars.

â€œI have finally returned to the warm embrace of the homeland,â€ Meng said. “As an ordinary Chinese citizen going through this difficult time, I have always felt the warmth and concern of the party, the nation and the people.”

The chain of events involving the world powers brought an abrupt end to the legal and geopolitical feuds that disrupted relations between Washington, Beijing and Ottawa. The three-way deal allowed China and Canada to each bring home their own detained citizens as the United States completed a criminal case against Meng who, for months, was mired in an extradition battle.

â€œThese two men went through an incredibly difficult ordeal. Over the past 1,000 days they have shown strength, perseverance and grace and we are all inspired by them, â€Trudeau said of the two Canadians.

Meng is on bail and has been living in a multi-million dollar mansion in Vancouver since his arrest, while the two Canadians have been held in Chinese jail cells for more than 1,000 days with lights on 24 hours a day. 24.

The first activity took place on Friday afternoon when Meng, 49, reached a deal with federal prosecutors calling for the fraud charges against her to be dropped next year and allowing her to return to China immediately. As part of the deal, known as the Deferred Prosecution Agreement, she accepted responsibility for distorting the company’s business relationship in Iran.

The deal came as President Joe Biden and his Chinese counterpart Xi Jinping sought to ease signs of public tension – even as the world’s two dominant economies disagree on issues as diverse as cybersecurity, the climate change, human rights and trade and tariffs. Biden said in a speech to the United Nations General Assembly earlier this week that he did not intend to start a “new cold war,” while Xi told world leaders that disputes between the countries “must be treated through dialogue and cooperation”.

â€œThe US government joins the international community in welcoming the decision of the authorities of the People’s Republic of China to release Canadian citizens Michael Spavor and Michael Kovrig after more than two and a half years in arbitrary detention. We are happy that they are returning home to Canada, â€US Secretary of State Antony Blinken said in a statement.

As part of the deal with Meng, the Justice Department agreed to dismiss fraud charges against her in December 2022 – exactly four years after her arrest – on condition that she meets certain conditions, including not challenging any government factual allegations. The Justice Department also agreed to drop her request for Meng’s extradition to the United States, which she had vigorously contested.

After appearing by video conference for his hearing in New York, Meng made a brief appearance in court in Vancouver.

Outside the courtroom, Meng thanked the Canadian government for upholding the rule of law, expressed his gratitude to the Canadian people and apologized “for the inconvenience.”

â€œOver the past three years my life has been turned upside down,â€ she said. â€œIt was a disruptive time for me as a mother, wife and business leader. But I believe every cloud has a silver lining. It was truly an invaluable experience in my life. I will never forget all the good wishes I received.

Soon after, Meng left on an Air China flight to Shenzhen, China, where Huawei’s headquarters are located.

Huawei is the world’s largest supplier of network equipment for telephone and Internet companies. It has been a symbol of China’s progress to become a global technological powerhouse – and a subject of US security and law enforcement concerns. Some analysts say Chinese companies have flouted international rules and standards and stolen the technology.

The case against Meng stems from a January 2019 indictment by the Trump administration’s Justice Department that accused Huawei of stealing trade secrets and using a Hong Kong shell company called Skycom to sell equipment to Iran in violation of US sanctions. The indictment also accused Meng herself of committing fraud by misleading HSBC bank about the company’s business dealings in Iran.

The indictment came amid a broader Trump administration crackdown on Huawei over concerns from the U.S. government that the company’s products could facilitate Chinese espionage. The administration cut off Huawei’s access to U.S. components and technology, including Google Music and other smartphone services, and subsequently banned vendors around the world from using U.S. technology to produce components for Huawei.

The Biden White House, meanwhile, has maintained a hard line on Huawei and other Chinese companies whose technology is believed to pose national security risks. Huawei has repeatedly denied claims by the US government and safety concerns with its products.

Former Canadian Ambassador to China Guy Saint-Jacques, the former boss of Kovrig, said he was delighted that the two Canadians were at home.

â€œObviously, the Chinese were so eager to get Meng back that they dropped all claims that the two Michael’s had been arrested for good reason. They must recognize that their reputation has been seriously tarnished, â€said Saint-Jacques. â€œThere are grunts within the Chinese Communist Party, people say, ‘Which way are we going, Xi Jinping? We are creating too many enemies. Why are we enemies of countries like Canada and Australia? “

Eric Tucker in Washington, Jim Mustian in New York, and Jim Morris in Vancouver, Canada, contributed to this report.