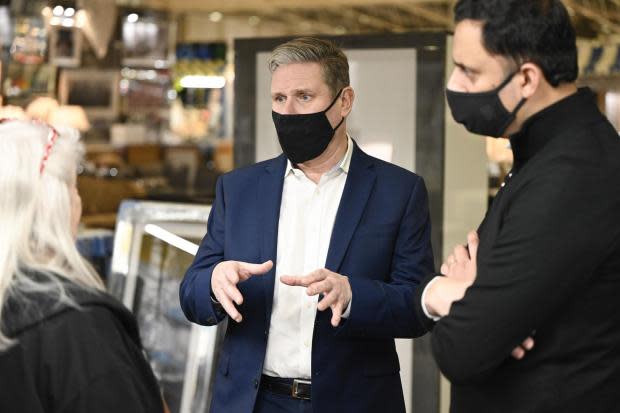 Can the question of Scottish independence ever be “settled”?

Question: Should Scotland be an independent country? Second question: if there is another referendum, will the result “settle” the question? Third question: can the question of Scottish independence ever be ‘settled’ or is it this: yes…no…yes…no…forever and ever? It’s quite a thought isn’t it?

The reason I ask all these questions is that Labor leader Keir Starmer was at the Forge Market in Glasgow the other day and seemed to suggest that the answer is ‘yes, the independence issue can be settled’ and he wants to do as soon as possible as Prime Minister by strengthening the powers of Holyrood without another referendum. “I think it’s very important to fix this problem,” he said.

This is quite an interesting thing because not only does Sir Keir seem to think that the question of independence can be resolved, but he seems to think that it can be done without another referendum, and there may be trade unionists who are very fond of the sound of this idea. Many trade unionists remember the days when support for independence was over 30% and Scottish nationalism was a minority interest and some might regret a return to those happy days. But can Sir Keir do it?

In fairness to the Labor leader, it is not necessary to go so far back to find a time when the issue seemed to be settled and there seemed to be a fixed will for the union. Yes, the constitutional arguments raged long before 1997, but the argument was led by Labor and the Liberals and the goal was not independence, it was autonomy within the union. The 1997 referendum was also designed to realize the desire for autonomy and to some extent end the dispute and move on, although we all know what happened with that.

Go back a little further and the question of Scottish independence seemed even more niche and remote. I once asked Malcolm Rifkind, who was a strong proponent of devolution, why he hadn’t pushed more for home rule when he was a minister under Margaret Thatcher and his answer was no because the question seemed settled. “He didn’t dominate Scottish politics,” he said, “If that was the case, why didn’t 100,000 people march down Princes Street saying ‘We want a Scottish parliament’?”

If the question is whether we can ever return to those relatively stable times when the constitution was not the burning central issue that it is now, Sir Keir seems to think we can by effectively repeating more of the strategy used by Tony Blair in the 90s. and by Ed Miliband in the days leading up to the 2014 referendum. In other words: more powers for the Scottish Parliament and in Sir Keir’s case, that could mean anything but independence.

Predictably or understandably, many Scottish nationalists reacted skeptically or cynically to Sir Keir’s remarks and with opinions on independence seemingly split 50/50, it can be hard to imagine this taking hold. It is also hard to imagine any significant number of nationalists content with “Anything But” and part of a new consensus in which independence is no longer the constant nagging question that it is now.

But again, the laws of political thermodynamics dictate that heat and energy in a problem cannot last forever and that must be true even in the independence argument. There was a time in Quebec, for example, where divisions over sovereignty were as narrow, if not more so, than they are today in Scotland and yet the most recent polls in Quebec suggest that support for Independence receded in the 1930s – in other words, back to the kind of levels last seen in Scotland before the 2014 referendum.

Of course, direct comparisons between Quebec and Scotland are tricky – parties and political structures are different – but the general point is valid: even the most intractable and divisive situations can change and take hold and there is no There is no reason why Scotland should necessarily be an exception. . The muddy trench we find ourselves in may seem like the new normal, but normality isn’t always forever.

The problem for Sir Keir is of course how to get to the point where he can deliver on the promise he made at the Glasgow Forge and we know that would require him to win a general election with an unprecedented performance for the Labor Party in England. Whether he would then deliver on his promise and settle the constitutional argument in Scotland also depends on whether a significant number of nationalists – at least a third of them realistically – accept the new constitutional provisions and are relatively satisfied. From where we are now, it’s hard to be optimistic about this.

There is also the question of leadership in Scotland, which is absolutely essential to all of this. Nicola Sturgeon is not as effective or as powerful as she was in her early days as Prime Minister – her record in government and her failure to hold a referendum have eroded it – but she remains a formidable politician who has outlived many, many Labor leaders. If Sir Keir really thinks there is a chance his ‘Glasgow vow’ will fix things, Sturgeon is unlikely to remain Prime Minister.

Should she move on – when she moves on – that may be different of course; the situation could change for the simple reason that her successor is unlikely to be as efficient as her (take a look at her colleagues if you don’t believe me). Sturgeon has often pointed out to Holyrood that the opposition parties desperately want her out and she’s right because they – and she too, I suspect – know Labor would have a much better chance against another SNP leader .

However, I also recognize that the constitutional arrangements in the United Kingdom are by consent of its citizens. Sir Keir may hope he can ‘settle’ the question of the constitution soon enough if he ever becomes Prime Minister, but while we hope he does, we should also recognize that an issue as important as the Scotland’s future should never really be settled at all. We may be able – one day – to go on with our lives without thinking too much about independence, if at all. But it will never go away, not really. It will never be settled. And that, even for people like me, is a good thing.

Our columns are a platform for writers to voice their opinions. They do not necessarily represent the views of The Herald.